As all good history students know, Tennessee was an instrumental state in the American Civil War. Some of the earliest grand-scale battles of the war were fought in Tennessee, on through 1864, some right within the area of Humphreys County. As a state that would be considered below the Mason Dixon line, had it had been extended west of Pennsylvania, it is interesting to note that Tennessee would have been considered a southern state. However, the whole state wasn’t part of the Confederacy. The eastern half actually fought with the Union to stay united. For those who love to visit and relive history, there’s plenty in Humphreys County to get your imagination rolling about what life might have been like in Tennessee long ago.

Maybe you enjoy history, but the Civil War era is not your favorite time frame. No need to worry. You’ll be sure to find monuments and markers for many other historical time periods as well. Whether you prefer to visit cemeteries to learn about the past or would rather walk through a museum, Humphreys County has you covered. Just look at all the different experiences you’ll find from so many different time periods of the past.

Toward the end of the Civil War, in late 1864, the Johnsonville river port on the Tennessee River was destroyed by the Confederate Army. This battle was a Union loss, as many boats and supplies were destroyed under the command of Cavalry Commander Major General Nathan Bedford Forrest, surprisingly defeating the Union’s naval force. The raid lasted 23 days, practically annihilating Union logistics in the area. Despite the losses, Major General George H. Thomas from Nashville was still able to follow the battle with a Union win in the Franklin Nashville Campaign, preventing Lieutenant General John Bell Hood from successfully invading Tennessee.

The memorial state marker commemorating that which was lost can be found at the intersection of Thompson St. and Mill St. in Waverly, the Humphreys County seat. 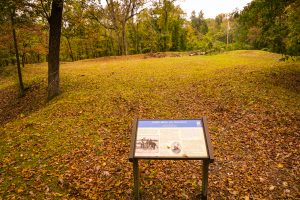 Fort Hill was the headquarters of the 13th U.S. Colored Troops (USCT). Their mission was to defend the military-dedicated railroad that ran along the Tennessee River. The railroad was built in 1863 by a troop of almost a thousand newly recruited former slaves organized by Union Gen. Alvan C. Gillem. The troop was assisted by other USCT units from Iowa and Kansas. When the railroad was finished, they moved on to build Fort Hill there in Waverly. In 1864, this troop fought in nearby Nashville in the Battle of Nashville. As the troop was based in Waverly, this is where Lt. James Nicholas Nolan of the 1st Kansas Battery went when he returned from battle. After the war, he built a house on the hill near the fort and eventually became the mayor of Waverly. The Nolan House has been maintained over the years and was even added to the National Register of Historic Places in 1986. It served as a bed and breakfast for several years, until it was recently sold to a private buyer. Fort Hill is now the Humphreys County Museum and Civil War Fort and is still open for business.

Named for Andrew Johnson (governor of TN from 1862–1865), this town was originally a steamboat landing. Once the Civil War began, Old Johnsonville became a major supply stop off the Nashville and Northwestern Railroad in 1864. The Confederate campaign destroyed the depot a few months later, also annihilating Union defense of the railroad. After the war, the river post became a river-rail transfer point and helped the city to grow and prosper for almost four decades. At that point, a flood caused its prosperity to cease, and by 1945, the town was no more. However, a historical marker for Old Johnsonville exists and can be found just inside the Johnsonville State Historic Park.

To really learn all you can about Humphreys County’s place in the Civil War, you won’t want to miss a visit to the Civil War Museum. The museum adjoins Fort Waverly, another important Tennessee stronghold designed to protect the railroad that provided Union soldiers with needed supplies.

One great feature of the museum is that it doesn’t just center around the Civil War but is an all-inclusive historical museum for the whole county. Artifacts you’ll find that are not related to the Civil War include ancient Native American relics and other items reflecting the area’s history.

The town of Waverly suffered a terrible blow that brought the Humphreys County Seat national attention. In 1978, a mere two days after a train from Louisville and Nashville wrecked, workers were still cleaning up a huge amount of propane fuel from the accident when one of the derailed tanker cars exploded. The explosion led to a fire, sadly killing sixteen people and injuring more than two hundred. A good deal of the older section of Waverly was destroyed in the fire, wiping out homes and businesses alike and costing millions of dollars in damage. A marker is placed at the site as a memorial, which is located on E. Railroad St.

Found in McEwen, a small log church was built in 1849 by Father Aloysius Orengo to provide a home for Irish immigrants, who were working furnaces and herding sheep. In 1855, the church was moved and became the first school in Humphreys County. The school needed a bell, so the school’s founder established the annual Irish picnic to raise funds. Unfortunately, the church was destroyed during the Civil War, but it was later reconstructed, with new buildings going up in 1877 and in 1925. The church that now stands on St. Patrick Street was dedicated in 1949.

History lovers who want to go way back in time, before the Americas were even colonized by Europeans, will appreciate this area of Humphreys County dating back possibly to 1100 A.D. The area is a mound complex that represents where the Duck River and Buffalo River converged at one point. A set of statues was erected on the site in 1895, shortly after the area was discovered.

Speaking of going back in time, give the kids a taste of what it was like during the Civil War during the Civil War Days held at Johnsonville State Park each year. Hailed as a “living history event”, this free event includes history presenters, live musical performances, weaponry demonstrations and period encampments complete with artillery, infantry, and civilian demonstrations. If that’s not enough, the booming cannons should kick the “bored” right out of your kids!

Gravesites and Memorials of Historical Figures

Jesse James, going by the name of J.D. Howard at the time, lived in Humphreys County during a period of time from August of 1877 until 1879, when he moved to Nashville. While in Humphreys County, James’s wife gave birth to twin boys who only lived a few days and were then buried in the area where they lived. James spent his time here farming and racing horses. A marker is placed at the site of his former home.

Captain William Robert Anderson was a U.S. Naval Academy graduate who fought in the Pacific theater of WWII. Of note, Anderson commanded the first atomic submarine, making the first transpolar mission, sailing under the North Pole in 1958. After his military service, he served in Congress to represent the 6th District of Tennessee from the mid-1960s through the mid-1970s. Anderson is buried in Arlington National Cemetery, but a historical marker can be found near his birth site.

Hattie Wyatt Caraway was the first woman to be elected to the upper chamber of the U.S. Congress in the early part of the 20th Century. She was also the first woman to preside over the Senate and chair a committee. A historical marker is placed in Bakerville near the place of her birth in 1878.

You might also consider taking a self-guided tour of Humphreys County’s cemeteries. Here are a few people of note to look for and where to find them. 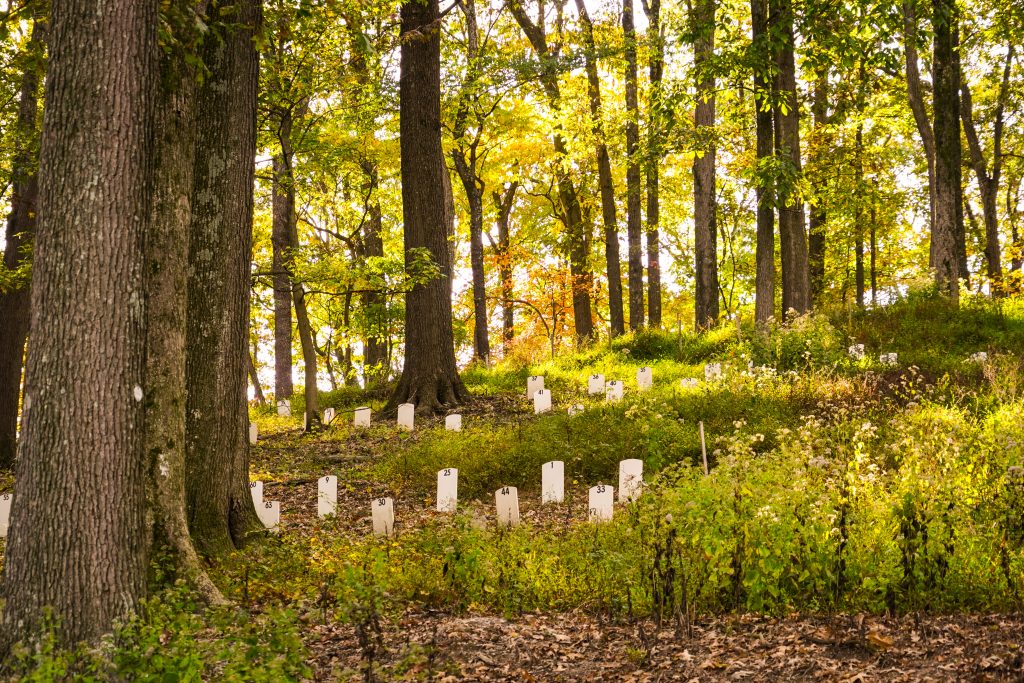 You will find many other historical markers in Humphreys County, including Enoch’s Mill, the Yellow Bank Trestle, Hotel Dixieland, Reynoldsburg, and the Porch-Reed School. Spending a week in Humphreys County may not be enough for a history lover to take it all in. It’s possible to fall in love with the area and want to live there. Just ask the locals!

Fought over 2 days in 1864, the Battle of Johnsonville came at the tail end of a 23-day raid by Confederate commander Major General Nathan Bedford Forrest after he attacked the Union supply base at Johnsonville. The memorial state marker commemorating that which was lost can be found in Waverly, the Humphreys County seat.

Fort Hill was the headquarters of the 13th U.S. Colored Troops (USCT). The Nolan House has been maintained over the years and was even added to the National Register of Historic Places in 1986. Fort Hill is now the Humphreys County Museum and Civil War Fort and is still open for business.

What remained of the Johnsonville Depot became the thriving railroad town of Old Johnsonville. The Tennessee Valley Authority (TVA) dammed the Tennessee River in the 1940s creating Kentucky Lake. The lake now covers much of the historic town of Johnsonville.

The Humphreys County and Civil War Museum houses a collection that reflects the rich heritage of the county. The museum stands as an important repository of items of local interest, prehistoric Native American artifacts and a special collection interpreting the role of the Civil War in the county and surrounding area.

A free museum housed in a caboose memorializing the lives lost in the railway car derailment and subsequent explosion that occurred here in 1978.

Originally built in 1849 to provide a home for Irish immigrants, the St. Patrick Church was destroyed during the Civil War but rebuilt with new buildings going up in 1877 and 1925. The church that now stands on St. Patrick Street was dedicated in 1949.

The oldest in the area is the Link Farm State Archaeological Area, which you can drive straight through. While the area is closed to the public unless there’s a tour scheduled, we recommend slowing down at least a little bit to take in the ancient Native American history in this area.

Constructed from logs, planks, and concrete in 1934, the water-powered mill and electrical generator was built by Wilbert Enochs to serve as a grist mill for the area as well as supplying electricity for his home and a few others in the area.

The historical marker for The Yellow Bank Trestle, a wooden railroad trestle built for the Nashville & Northwestern Railroad during the Civil War, is located a half mile away from the actual site.

Built around 1870, Hotel Dixieland was known for hospitality, home cooking, and exquisite antiques. Notable guest Duncan Hines wrote about the hotel in his travel books and said their motto was “Where hospitality is a religion and chicken is born fried.”

When Humphreys County was first established back in 1803, the town of Reynoldsburg was chosen to be the county seat until it was later moved to Waverly in 1936 since it was a more central location in the county.

Established in the days of segregated education, the Porch-Reed school was built to serve the black community of Humphreys County until 1963, when integration was finally ushered in.

Going by the name of J.D. Howard at the time, the infamous outlaw lived in Humphreys County from August of 1877 until 1879. A marker is placed at the site of his former home.

Anderson is buried in Arlington National Cemetery, but a historical marker can be found near his birth site in Bakerville.

A historical marker is placed in Bakerville near the place of her birth in 1878.

This singer/songwriter is buried in Ebenezer United Methodist Church Cemetery.

This songwriter is buried in Richlawn Cemetery.

This bluegrass music influencer and fiddler is buried in James Cemetery in Bold Springs.